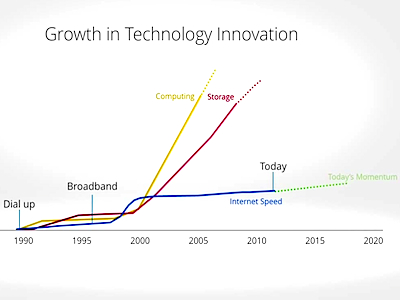 Google Fiber is certainly way out there.


All Google Fiber customers also get 1TB of free storage. If they buy TV service for an extra $50 a month, Google will throw in a $200 Nexus 7 tablet to be used as a remote control. Google is also giving away -- for free -- a package that offers 5Mbps downstream and 1Mbps upstream. ...... Google was able to get prices so low, in part, because it designed and built all the hardware for the system itself. This is a good reminder that although Google wasn't a consumer electronics company until recently, Google has actually been designing hardware for its data centers for more than a decade. It was this data center efficiency that allowed Gmail to offer way more free storage than competitors back in 2004....... just like Gmail unlocked an enterprise business, Fiber could unlock a whole new business as an ISP and TV provider..... Now, we just need Google to roll out Fiber to the rest of the country.

If Google can figure out a way to use snooping technology to serve well targeted ads it could make internet access ad supported, and it could take top speeds to all corners of the world. It would not be limited by Fiber. Heck, it could use satellite technology as necessary.

This is the single most important thing Google could do. At globally universal broadband, Google surpasses the nation state in power. It also becomes a trillion dollar company in the process.

That "5Mbps downstream and 1Mbps upstream" free deal is a big deal.