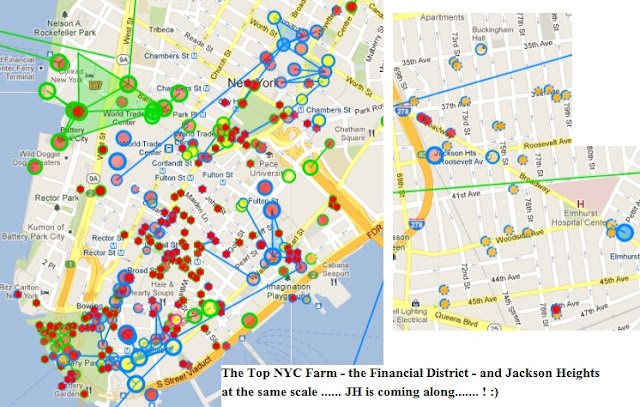 Today was supposed to be the Inter Faction Jackson Dosa Interaction, src's brainchild. But my Co-Host chickened out! SRC is like, tomhuze says you revealed the NYC Resistance secrets through code heavy photographs you shared publicly on Google Plus, and so I can no longer talk to you!

Part of the plan was that both src and I would take about five minutes each to make fun of as many agents in the city as possible. If you deprive me the opportunity to do so at a Dosa place, I am going to do it at a blog post, and so here goes. 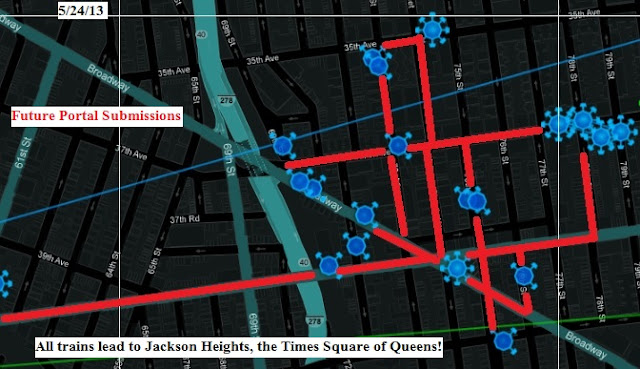 As one of the top agents of the global Resistance, I truly appreciate what tomhuze and rmazzara do for Bedstuy Resistance and College Point Resistance respectively. That low level stuff is also important.

Kimon finally got his long coveted job as the Night Watchman for the Grant's Tomb. He will no longer teach.

I have never seen KeyserJoze in person. 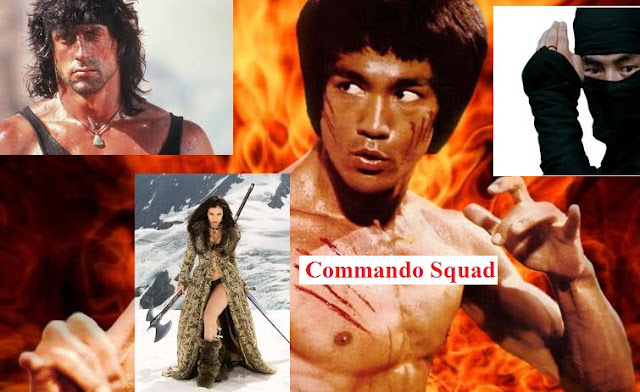 No, mugu does not live in Williamsburg, he just farms there.

Das is so deeply biased against Astoria and Queens in general that when he shows up in Astoria (two times) and the Flushing Meadows Corona Park (one time) he makes news.

kogent and Muevelo have been talking.

putch pushed lighthouse0 into the East River. It was accidental.

AbuSalem is on vacation, hence the Level 5 green portals in Long Island City that used to always be Level 7!

And you thought R2Detour was a human being.

I bet you mispronounce sma. It is NOT s-m-a!

TIM3PORT went to New Jersey, to return another day. The first agent to have a baby on the COMM!

evondosha knows what mugu's handle means. It is an inside joke.

PaulineParker and MissParker stole each other's name. It does not help that both are not on the same team.

Gladly QueensTiger and BronxLion are on the same team. Or you could only imagine.

RedJava is rumored to be red hot! She is supposedly into The Art Of War.

MzDemeanor knows how to carry herself.

slomar took five hours to sweep through Forest Hills. He is slow like that. Kruxoli on the other than can sweep in four hours 60 minutes! And both want L8 farms there!

Arbitrage arbitrarily RSVPd for the Dosa event before he realized it was in, wait, is it in Queens! I am not going THERE!

I don't claim to know district. He claims otherwise.

Mexecutioner, you guessed it, killed a few agents on his last mission in Mexico.

Gellean would be that white haired white guy who cusses in Spanish. He likes to retire from the game every few weeks.

WW4 thinks Ingress will give him World War IV. Redneck!

Sonik was last seen in Bayonne. If anyone knows of his whereabouts please call the following number.

Eck has been eeking out ingressing far out on Long Island. He howls every now and then.

Hightwr is tall, so is TinyA.

Avumede claims he doesn't "care" about the blue portals around him. 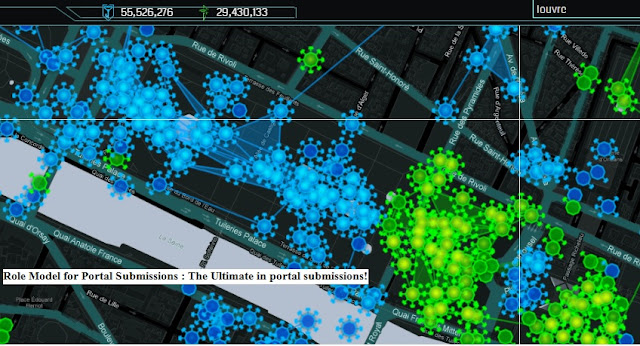 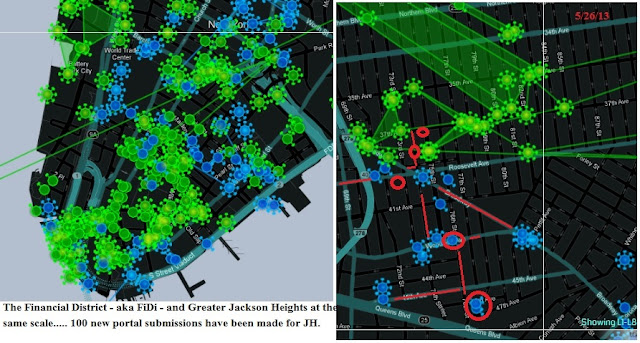 Ingress: L8 Farms: Getting 8 People To Show Up 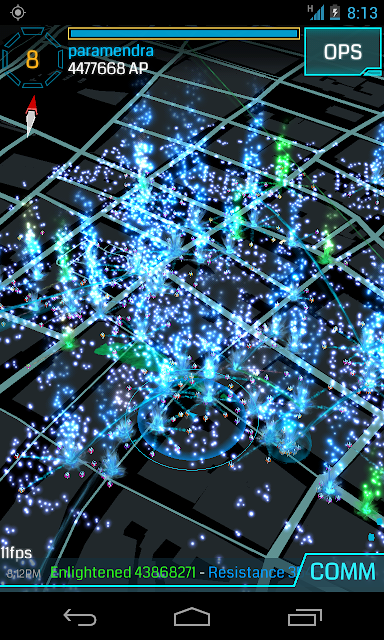 Level 8 farms are clearly superior to L7 farms. Although you need only three L8 agents to build a L7 farm, you need eight L8 agents to build a L8 farm. And you might not have 8 local L8 agents in your area. So you need to help each other level up fast. And even if you have them, you might not know each other. You might know each other, but not everybody might know everyone else. Or it might be hard to get them all together. That is where the Ingress twin Google Plus comes into the picture. Google Plus is the necessary alternate app to the Ingress experience. You can't have all the fun with only the Ingress app. Although it is possible to overdo Google Plus and make it get in the way of the Ingress experience. There is overkill.

L8 farms are so important that it is my claim the team that organizes more L8 farms in a given territory is going to dominate that territory. That one metric alone can be the deciding factor.

L7 farms are trickier. It is possible there are three local L8 agents in one location. The attacking agent might have to travel. But how much traveling can you do? There are some parts of the city that boast of near permanent L7 farms. 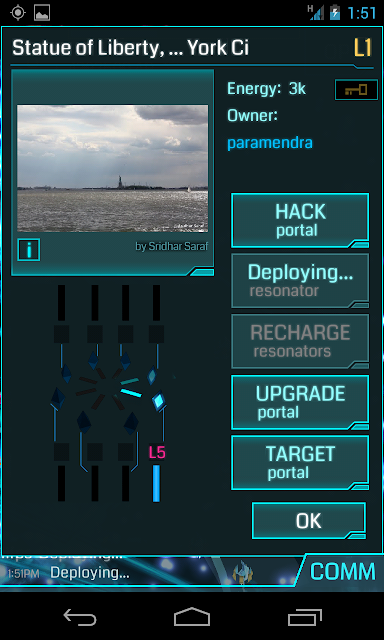 I think more incentives should be added to portal ownership.

One would be the concept of collecting rent. So for every day you own a portal you collect maybe 10 points. That would also increase the velocity of the game in that you want to take back a portal before those 24 hours are up. There are players who nurture about a dozen portals or two that are close to where they leave. I think they should be rewarded for keeping those going. Or even 20 points per day. So 10 portals at 20 points per day would bring you a cool 200 points, which is not a whole lot, but it is something. It would make remote recharging more rewarding. And as more portals are added this would make it less likely that portals go out of use and decay.

Another would be the concept of portal history. When you collect a key for a portal it would also have a section that gives you a history of all agents who have owned that portal in that portal's entire history, time stamped.

These two enhancements would make portal ownership more rewarding, and more people would go for it.

You have to be crazy about Tumblr to truly understand its appeal. It is half way there between Blogger/Wordpress and Twitter and, to its hard core users, more fulfilling than both. You can't amass a huge audience and not be able to monetize it. But this sale to Yahoo means monetization can wait some more.

Marissa Mayer failed to buy FourSquare as a Google executive, but she has managed to buy Tumblr as the Yahoo Chief. Both are companies that have helped put New York City on the tech map.

Last I met David Karp was during Social Media Week. This validation is well deserved. Now Karp and team get to nurture the local tech ecosystem some. I am assuming the Tumblr team will stay put in the city. I don't think it wants to wear "f----g Dropbox T-shirts!"

Karp, I have a clean energy idea that I need some seed money for. Are you in? :)

The billion Yahoo paid it will get back in the stock market reward to the Yahoo stock from the cool factor from Tumblr to the Yahoo brand. So basically this web property has been had for free. It is win win. This is also a strong signal to young and happening tech entrepreneurs that Yahoo is a brand that can be trusted with sexy acquisitions. That is worth at least another billion.

Fred Wilson must be very happy. You couldn't get near that guy without him gushing about David Karp at least once. Now you have concrete proof what it was all about.

David Karp showing up at Yahoo is like Arianna Huffington showing up at AOL, only I don't think Karp will outshine Mayer. She is a hotshot herself, very much so.

Yahoo buying Tumblr for $1.1 billion, vows not to screw it up


The deal is expected to increase Yahoo's audience by 50 percent. ..... Shares of Yahoo rose in early trading on Monday but quickly gave up those gains and were little changed at $26.54. Through Friday's close, they had risen 70 percent since Mayer became CEO. ..... David Karp, 26, who founded Tumblr in 2007 and will remain CEO. ...... Karp, a self-taught programmer who left high school in favor of home schooling ..... his take in the billion-dollar sale would top $200 million. .... "There are a lot of rich people in the world. There are very few people who have the privilege of getting to invent things that billions of people use," he said.

Update: I think Karp will buy a plane.

I was able to do 300K in 2 hours and 15 minutes earlier today. I did about 450K total for the day, which is the most I have ever done in one day. I think I am about half a million points from being the top blue agent in New York City.