If You Did Not Attend SXSW

Email ThisBlogThis!Share to TwitterShare to FacebookShare to Pinterest
Labels: sxsw 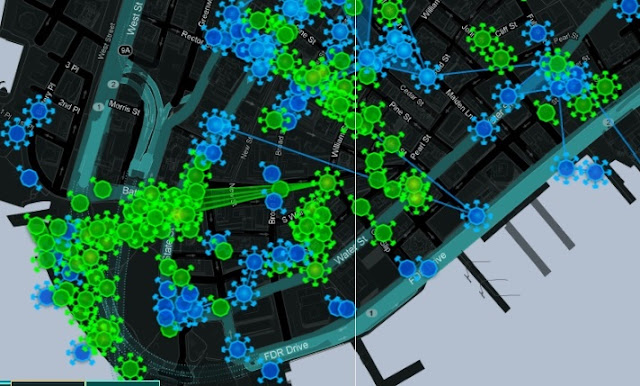 Ingress is a great way to explore the city. It takes you to parts of the city you never have been and would not have gone. I am talking about 20 blocks from where you live. The game is also a great way to meet people. And there are good practices. Strategies are possible. But this is not exactly chess.

Right now the city looks about 60% blue. Would it be possible to make it 90% blue? I think it is possible but  it gets harder as the percentage goes up.

When you are dominant, your players start taking it easy. Most prefer not to get regimented. When the city is largely blue it is great for the most active green players. They have more portals to capture.

But even going from 60% blue to 75% blue would fit my definition of victory.

Another definition of victory would be if we could turn permanently green areas like the High Line, the East Village, Williamsburg, Long Island City, the UN blue for a few days in a row.

I am under no illusion we are creating anything permanent. Permanent victories are not possible. If they were, the game would not be fun. But I think it is possible to shift the ground.

"A 1999 book by two Chinese colonels put it more aggressively (albeit in a sentence as verbose as it is apocalyptic): "If the attacking side secretly musters large amounts of capital without the enemy nations being aware of this at all and launches a sneak attack against its financial markets," wrote Qiao Liang and Wang Xiangsui, "then, after causing a financial crisis, buries a computer virus and hacker detachment in the opponent's computer system in advance, while at the same time carrying out a network attack against the enemy so that the civilian electricity network, traffic dispatching network, financial transaction network, telephone communications network, and mass media network are completely paralyzed, this will cause the enemy nation to fall into social panic, street riots, and a political crisis." No kidding."

Business Insider Is Doing Something Right

The online publication Business Insider is doing something right and it reminds me of The Huffington Post. The Post did commenting really, really well, and it was and is very good at linking to others, but a paragraph of quote first. Business Insider does that too. It often links to others. But what it does really good is taking you to read other related stories. You read one, and the next thing you know you are reading five others. And it is also smart about getting page hits from pictures and infographics. It sure "gets" digital. It feels lightweight but deals with plenty of heavy topics.

I am not being able to wrap my head around it. Maybe I will be surprised. But I don't see a place for it in my life. Facebook is already the top app on all platforms. It could have done better in software.

I can see a place for a Google phone. Heck, I have one. I like the deep Google integration. But Facebook? I just don't see it.