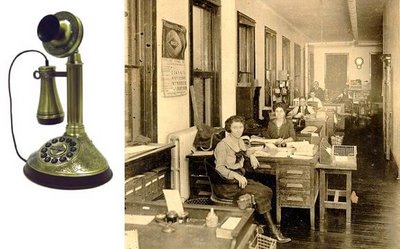 Now you can call from the Yahoo Messenger to a traditional phone for real cheap. That is quite an improvement. And you can give your Messenger a number so people can call you, and it costs you $25 a year.

I hope Google comes swinging to offer the same for free. Until down the road the idea of having a phone number sounds ridiculous. Don't you yave a messenger ID? Like your name? Or some version of it? And with broadband wireless, you have a cellphone with the same.

Google has acquired a company that makes it look like it is now going to try and offer "Office" online. Hey, I talked about that prospect a long time back. This was but inevitable. Sergei, Larry, read this blog. I got vision alright. (Google's To Do List Keeps Growing)

Of course word processing has to go online. So has everything else.

Email, search and news are great and seamless at Google. But user created content has so many glitches. That is another growth area for Google.

Blogger has too many template problems too often. Next you know, your template has truncated, and your blog looks like Egyptian calligraphy.

And give many more template options.

Also Google Pages is not as easy to use as advertised. Make it easier. Much easier.

Google Video pay per view has been postponed, looks like forever. If they could make this possible, that would be an attack on traditional TV. Google Video has the potential to become a disruptive technology. But instead of empowering the individual, Google is too busy empowering the fat companies.

Offer an audio version of Google Video. Make it easy to create audio files and host them and publish them.

The utter lack of anything close to seamlessness for user created content is Google's number one weakness right now.

Yahoo is not a direct Microsoft competitor, Google is. Google is also a direct Yahoo comptetitor. That is why Google's market cap is so much larger than that of Yahoo.
Visitors