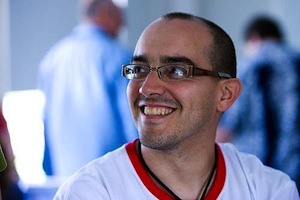 If you follow tech in the blogosphere, it is hard to miss out on Dave McClure. I read this blog post of his the day it came out, but only today found out he was one of the people behind something called the Silicon Valley Microfinance Network. This guy is of interest. I have been meaning to comment on his post about The Angle List.


Angel List .. the single greatest innovation in our industry in the last 5 years (aside from LinkedIn, Facebook, Twitter, & Quora) .... "Spray & Pray" investing -- aka a High-Volume, Diversified & Quantitative Investment Strategy -- is not just "ok", it's actually BETTER than "Focused" investing ..... investors with large networks & rolodexes who make "introductions", as their value is disrupted & marginalized by social platforms like LinkedIn, Quora, and Angel List. ....... a quantitative, high-volume investment strategy filtered based on reasonable assessment of team, product, market, customer & revenue along with domain-specific expertise, and selective follow-on investment with incremental knowledge of company metrics and progress CAN result in good outcomes. ...... arguably i'm the most active current user of Angel List -- i've done ~20 deals there ...... it's not a majority of my activity, but it's significant -- 500 Startups has invested in ~100 deals since we got started last year, mostly at seed stage ...... we plan to continue doing ~100 deals a year, and i'm sure Angel List will be a significant part of those (maybe 20+% ?). ...... the single greatest innovation in the venture capital industry since Paul Graham started Y Combinator 5 years ago. ...... Angel List provides greater visibility for a lot of startups

Image by jaygoldman via Flickrraising capital who would otherwise not have as much access to investors. this is very good for entrepreneurs ...... Angel List is/will have 100x more impact on the industry than the Start Fund (which currently only focuses on YC companies). ...... for most investors, Angel List is helpful -- either to get access to dealflow they would not previously have seen, to supplement their existing dealflow, or to see what is happening at earlier stages and inform later stage decisions. ....... for a few (mostly new, mostly angel, investors -- but not only them), Angel List accelerates herd mentality, and the emphasis on social proof can perhaps crowd out / overwhelm other useful signals (product, market, customers, revenue, team, etc) ........ Change happens either through VIOLENT participation, or VIOLENT competition. ....... differences between me & other high-volume investors like Ron Conway (whom i still respect tremendously even if he thinks i'm an ass), First Round Capital, Y-Combinator, Tech Stars ....... will probably always be known as a high-volume investor first, value-added investor second. ....... it's almost always 95% entrepreneur, 5% investor ..... if you remove the top-performing 10-20 VCs from the #'s, the overall industry as a whole probably hasn't beaten the market for decades aside from a few years in the late 90's ...... you better be at least getting 15-20% returns on average, or you shouldn't be opening your piehole. ..... i actually have been both a programmer and a marketer for more than 10 years each ....... traditional VC investment practices have resulted in EXTREMELY POOR financial returns ..... Benchmark, Sequoia, Greylock, Accel, Union Square, and others who have consistently out-performed on low-volume pace of investment for decades. ........ Mark Suster's GRP has done quite well in the past decade ....... s "a quantitative investment strategy" -- is likely to be successful than a "focused, low-volume" investing strategy. ....... the odds of getting billion-dollar wins are astromonically higher than 40-1. ....... i'll stick to technical hitting ...... Social Networks & Reputation Systems like LinkedIn, Quora, Angel List are Destroying & Marginalizing the Value of "Rolodex" & "Finance/MBA" Investors. Domain-Specific, Expert Investors are the New Black. ....... LinkedIn, Quora, Facebook, Twitter, Angel List, etc. most big name VCs over the years have PRIMARILY been trading on reputation and connections which are now MUCH less necessary due to the advent of social networks and other high-visibility communication platforms which are dramatically more transparent than they were 10 years ago ........ 2 key areas of expertise: building product & distributing to customers. making or selling. creating or hustling. ....... dominated by those who are most visible and most relevant on Facebook, Twitter, LinkedIn, Quora... and Angel List. most VCs barely blog, and have no idea what it means to engage on any of these systems ........ our team includes engineers, marketers, designers who have worked at companies like PayPal & Google & Mint & YouTube, and our mentor network currently does many of the jobs in the first group at companies like Facebook, LinkedIn, Twitter, Groupon, LivingSocial, Zynga, Twilio, SlideShare, Zong ........... we run domain-specific conferences

Image by Robert Scoble via Flickron social platforms & marketing (Smash Summit), on design & user experience (Warm Gun), on startup metrics (Lean Startup w/ Eric Ries, another 500 advisor), on messaging & communications (Inbox Love), and we reach a global network of 100+ companies across 3 continents and over 10 countries (and visit them via trips like GeeksOnaPlane). we webcast our accelerator talks live to anyone in the world who wants to tune in ...... i challenge ANYONE or ANY firm on the planet to show me the list of "value-added" resources they can bring to the table compared to us, even though we are barely one year old. we are NOT simply spray-and-pray investors -- we are The Next Generation. we are What's Coming.

For me it is not an either or thing. And an alternate form of investing has been articulated by none other than Fred Wilson himself as a comment to the Dave McClure blog post.


that was not brief Dave

as one of the few VCs you are willing to hear an argument from, i feel compelled to provide it

spray and pray is going to give you a index fund like return. it will perform as well, but no better or worse, than the entire sector you are investing in (web/mobile web/etc)

and i suspect that the returns on that index fund will be poor because the sector is overheated and valuations are at historically high levels.

a focused investment strategy can perform a lot worse but it can also perform a lot better. if you choose wisely, purchase large positions in the investments you choose, and then support them over a long haul, particularly the best performing ones, you can and will do better.

as for investors needing specific experience to provide value, i beg to differ. i have never had a real job since i stopped writing software for a living in 1985. and yet i suspect the entrepreneurs i work with would give me good marks for adding value.

being a great investor has very little to do with domain expertise. it has to with being someone you like, trust, who will give you honest and constructive feedback, who will support you when others won't, and who will do whatever it takes to help you succeed.

and btw, you can't do any of those things well when you have 500 portfolio companies.

I think we need both. The Angel List Dave McClure has rightly compared to Y Combinator. It is a major step in innovation in the angel funding space. But that does not make later stage VCs go away. Someone like Fred Wilson is not old school. If anything, he is just starting out. 2011 I have called Fred Wilson's year one. If you read his blog like I do near daily, you can't miss the fact that the guy totally gets it that the 2010s belong to the mobile web. And he is an early spotter and investor in two of mobile web's top properties, namely Twitter and FourSquare. Fred Wilson thought of something like Twitter before he actually came across the actual thing. He found the actual thing was better than the service he had imagined.

Image by Laughing Squid via Flickr
It is good for innovation for Dave McClure and Fred Wilson to co-exist. We need both styles of investing. It has been a welcome debate though.