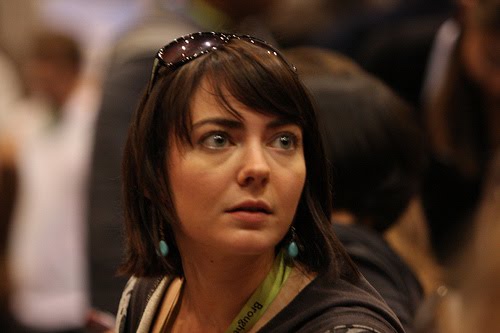 So I was watching Tumblr this morning - yeah, I watch Tumblr like others watch TV - and along showed up Kristin. I met her at the first FoodSpotting First Friday early this month. I think I might see her again this Friday. I reblogged her.

Then I realized what I reblogged she had reblogged from Caro, as in Caroline McCarthy. And I am thinking, I thought I followed Caro on both Twitter and Tumblr, but she never shows up in my Tumblr stream. What's going on? I clicked over to her Tumblr page. I found out I was not following her after all. I think I followed her at one point and then unfollowed her later.

I started following and proceeded to check out several of her recent posts. I do that often on Twitter. I will discover a person, read about 20 of their tweets, retweet about six of them. And move on.

Reblogged a song over to my primary Blogger blog. Then I struck gold.


Caroline McCarthy: Why Princeton’s Women Take Second Place on Campus: gender politics at Princeton (from which I graduated in 2006) ...... Many of the girls who showed up at 9AM lectures in sweatpants after proudly pulling all-nighters (“I’m so stressed. I haven’t slept” is a statement of triumph) had suspiciously fresh coats of makeup on. ..... as a result of this pressure to both look and be busy (and succeed at it), women may be compelled to take on more activities at a lower level of involvement rather than attempting to spring for the top position. ...... the resume-padding, hyper-social-climbing guys who tended to fill up the top spots of many campus organizations even though the rest of the student body was snickering about how our student body president didn’t even seem to realize that he couldn’t get anything done. ...... the top leadership position in any campus organization can bring responsibility, scrutiny, and liability that I can imagine many female students would see as distracting and unnecessary given that they’re simultaneously trying to pull off 4.0 GPAs. ...... The “hook-up culture” is very real, and in retrospect, it’s extremely avoidable — but try telling that to an 18-year-old girl who’s living away from her parents for the first time and really wants to party and meet hot older guys. ....... I knew a lot of people on campus who did not drink, many who didn’t go out regularly, and they were in no way held back from leadership roles on campus. The guys who were visible campus leaders (frat/eating club officers and sports team captains aside) were generally not the ones picking up women while wasted at 3AM. ...... I took guys way less seriously in class if I’d ever seen them go streaking. ..... I was shocked by how many of my female classmates vocally counted “find a husband” as one of their college goals

I dig it when women talk about gender. Sexist women bother me. This post by Caro reminded me of Rachel Sklar's big thing at TechCrunch Disrupt last year. People talked about it for a while, until months later I finally decided to check out the video to see what the fuss was about. I get the impression TechCrunch made up for that this year at South By South West. They redid the drama with another woman TechCrunch writer and Rachel and did it right this time. Or so I hear. I have not seen the video. I don't know where, if anywhere, it is online.

Image by skidder via Flickr
And there just so happens to be a Y+30 event tonight called The Future Of Women. I signed up. I think I might show up. But will make the final decision a few hours later. If I don't go it will be because I already am scheduled to show up for a few other events this week that I got off of Charlie O'Donnell's weekly events newsletter. This week the newsletter has gone snazzy. There are snazzy ads at the top and on the side. Charlie is moving up in the world, I am telling you.

Monday 7PM - Y+30: The Future of Women
Wednesday 6PM - Discussion with Eric Ries, brought to you by the Columbia Venture Community
Friday 7PM FoodSpotting First Friday (Charlie is not aware of this yet)