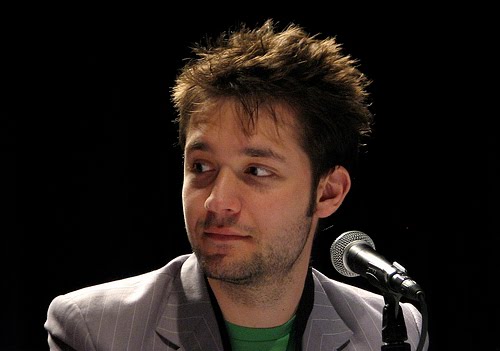 I read somewhere you had to pick between the panels, two out of four allowed. So I showed up early for registration. Ends up you did not have to pick. So I went to all four. Well, there was a Seth Godin speech to begin with. I did that. And Chris Dixon spoke after the panels were over. And there was the social/networking part to cap it all. All in all it was a half day affair. It was a few trips between floors one and five for me. I got to take in half of each panel.

Since I was a little early, I started reading the Seth Godin book that they gave out to everybody who showed up. Then Seth Godin showed up. He was dragging along this bag that made him look like he just got off a plane. The entrepreneur skill level is higher than the techie skill level, than the MBA skill level. He confirmed that point.

This was my first time seeing him, and I shook his hand and told him that. I read your blog, I said.

I greeted Vin Vacanti on my way out, and went upstairs. After Charlie O'Donnell spoke twice I decided it was time to head back downstairs to the first panel. There was a restroom break to take on the way down.

What Is Your Emotional Age?

Bumped into Soraya Darabi in the hallway.

"Hello," she said, as I caught a glimpse of her in my mad dash to the restroom.

"Oh, hey," I said from the train window, the train in motion. Turn right, catch a glimpse of Soraya Darabi for a split second, take restoom break, fly downstairs.

Got to meet Jen Fleis for the first time. Rent The Runway, I did not realize, is bigger than FourSquare. She spoke her easy to remember email address. I am going to shoot her an email.

I stayed for the panel after.

Mike Yavonditte recognized me from where he was sitting on the panel as I walked in and took a seat. He smiled. This was his first time seeing me in person. I took my seat and waved.

Then I flew to the Soraya Darabi panel upstairs on the fifth floor. Took a front row seat, asked a question. When I got back downstairs for the Chris Dixon speech, I got to meet Mike. We had talked over Twitter and email. Not surprisingly I had pitched him.

"Your valuation is too high," he said.

"That is open to negotiation," I said.

I don't drink coffee, I thought, but mum was the word. I am going to touch base with him.

At the party during the final hour I pitched a few people. Some were students, so I abstained. Some said although they were professionals they were thinking of launching their own startup. So no pitch. But I think I found two people - professionals - who fit the profile, 5K types, and so I grabbed their cards.

But the find of the day for me was Alexis Ohanian. I heard about Reddit for the longest time without knowing his name. Then I came across his name, I think on Twitter. Then I found out he was Reddit plus. He was also associated with Hipmunk. What most got me was that he had listed himself on his Twitter page as an angel investor, and he had been a Kiva fellow a few months. The guy knows the drill.

He sat on the same panel as Soraya. And I went to meet him after the panel was over. This guy impressed me. He has this raw nervous energy of an entrepreneur. If I had known nothing about him, and had met him, I could have deduced, this guy was an entrepreneur. He has an impressive track record already, but he hit me as someone oozing with promise. He came across like he might do something. This is a guy to watch out for. The furnace is on full blast.

Raising money, when you are desperate, can feel like it is all about money. But in hindsight the people you raise from end up being more important than the money they give you. People who just have money are not the most enticing of investors. I like entrepreneur/investors. Alexis Ohanian fits the bill like few people I have met.

I have been approaching 5K types, and that can look desperate, and it is. When I showed up in America, I ran for Freshman Class President. I picked up the phonebook and started calling every freshman who had been listed. When they did not pick up, I left voice mails. My roommate thought I was crazy. Short term he was right. I got trounced. But within six months I had myself elected student body president. Forget Class President. As for my startup, I have not picked up the phone book yet. I am just warming up.

100 people coming in at 5K each is 500K, a great round one sum. So there is a method to the madness. And I am open to 20K types, 50K types, 100K types. But never underestimate the power of 5K types. When Facebook's valuation went from one billion to 50 billion, ordinary people did not benefit. I want to go in the other direction.

1,000 people coming in at 5K each is five million. That looks like a great round two figure to me. My thing could go profitable at 500K.

This blog post made me realize I need to join some woman entrepreneur groups NOW. Your energy, tone, confidence and bluntness all inspired and excited me. "Three years from now you will need my help. But right now you have the upper hand. I need your help. Help me. End of pitch." <- ROCKSTAR!

I happen not to be a woman.