Rapportive founder’s new startup Superhuman is what Gmail would be if built today
Beyond Gmail: The new race to reinvent your inbox
Email Productivity with Superhuman
The Superhuman Change To My Current Email Tools
Superhuman
Rahul Vohra
Gaurav Vohra

founders! here's a step by step guide to get to Product/Market Fit; please send it those who need it —https://t.co/GKrgHn2XnP

Props to @SuperhumanCo for no longer making me fear my inbox.

.@SuperhumanCo is to email, what slices are to bread

I just love read receipt tracking feature in @SuperhumanCo. It is so powerful!

Paul Graham Asks For Disqus 2.0 Or A Disqus Disruptor

Or how to listen when everyone is talking? This is like the email inbox problem. What is the solution? There is only solution for those who get manageable amounts of email. If you get a HUGE (Trump word) amount of email, I am not sure there is a solution. Similarly online, forget teaching people etiquette. You can restrict membership, or you can restrict comments to people who are willing to reveal their real ID, but if you are opening up the floodgates, I am sorry but we are not talking technology, we are talking human nature and human behavior. After DARPA (or Tim Berners-Lee or whoever, or maybe Paul Graham, Al Gore) invented the Internet, Julia Roberts discovered people hated her! We can improve upon it. Like Gmail has become so much better with five inboxes. But I don't see a "cure" to online flaming. Except, maybe, ignore what you don't like. See no evil, hear no evil.

Google continues to delight. But I don't see how this solves the problem for those who get too much email.


Inbox is a total reinvention of email from Google
Google debuts Inbox, a new way to stay on top of email
Google’s Inbox is A New Email App From The Gmail Team Designed Not To Be Gmail
at October 22, 2014 No comments:

A Welcome New Feature In Gmail

I began this day by seeing a welcome new feature in my Gmail account. Having multiple Gmail inboxes is going to make life easier. Otherwise my first instinct when I log into Gmail at the beginning of a work day is to pick messages to delete. It should not be that way. My first thing to do should be to read and reply to important emails.

Ingress: Many Many Teams But Only Two Global Teams

There are some basic premises.

(1) This is a game. It is supposed to be fun. This is not a corporate project. There is no boss. Much of the fun in the game comes from the human interactions and the human frailties.

(2) The number one rule in Ingress leadership is you can't tell anyone what to do. But with their consent you can suggest things and share tips and wisdom.

(3) There are only two global teams possible. That is just the way the game has been designed.

Both sides already have started with city teams. The city teams on both sides all over the world cropped up pretty much independent of each other. So the challenge is not what you do when more than one team shows up. The challenge is how do you bring about communication and coordination among teams across a country, a continent, perhaps to span the globe.

There is room for multiple Resistance teams in New York City. I think team building should be encouraged. First of all it is a scalability issue. A G+ group past 500 members does not make a lot of sense. Maybe 200 is a healthy number. Beyond that a group, any group, should do an amoeba split. When you move from 500 to 2,000 agents in the city, some neighborhoods will qualify to have their own groups. Borough groups will no longer be enough. I know I want a Greater Jackson Heights group.

I have met many agents whom I have told, "My team is not the right team for you, you should join the other team." The Squad is not for everyone.

There is a cross faction hangout that popped up in my Gmail yesterday, and most of the usual suspects showed up, chief among them the Keyser. Maybe there is room for a cross-faction squad, and there is room for The Squad to coordinate with the existing organized Resistance team(s) in the city.

At some point the city might graduate to having rival L8 farms sitting side by side, permanently, because we want to seek new challenges other than building and killing L8 farms. Similarly the teams in the city will perhaps graduate to thinking team building is a welcome phenomenon. It is just like farm building, or home territory building. The goal should be communication and coordination, not name calling on the COMM.

Hotmail Has Come A Long Way

I have been aware of Microsoft's overhaul of its email service, but I only today tried to log in and use it. (I am a comfortable, happy user of Gmail) And, gosh, it is so impressive. It is a cleaner experience than Gmail. Although I don't see me switching. I still have my hotmail address from the late 1990s before Microsoft bought it. And it still works fine.

Yahoo Mail, on the other hand, continues to be confounding. It still is so very loaded. It is like having at least three different televisions on in your living room, at least two of which were turned on by others. I logged in there as well this morning. After trying to delete 25 messages at a time for over 30 minutes I gave up. Can I please have the option to delete all 12,000 messages in my inbox at once? Please? Maybe the feature exists, but with three televisions on, it is hard to figure out. With Hotmail on the other hand I was able to delete all 180 messages in the inbox at once. Okay, that is a hint. Yahoo's spam filter is sub par. 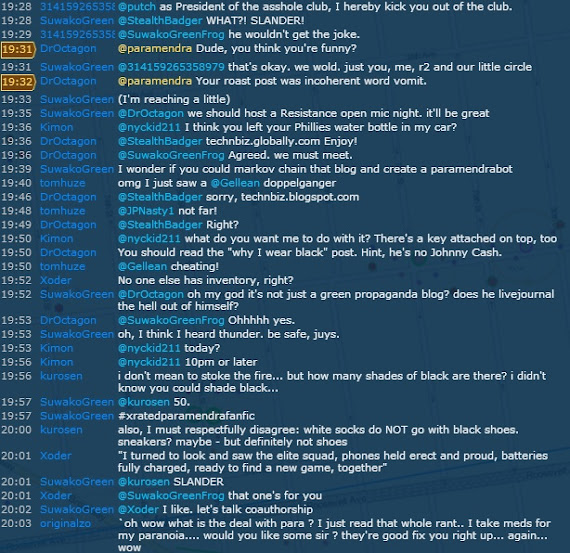 You start out by building portals. You deploy resonators, you fill up the slots, and you build portals. Then you go on to build fields. And I still get major kick out of it. The geometry of building fields gets me still. Then you go on to build farms. You can build up to a Level 5 farm on your own. You need two L8 agents to build a L6 farm, three for a L7. And the grand daddy of all are L8 farms: you need 8 Level 8 agents for that. Agents loaded with L8 bursters are just waiting to explode.

And farm building is great fun. L8 farms are probably the best part of hitting L8 as an agent in the game. Many agents go on to build home territories. They lay claim to maybe 20 portals. If you flip them, they will flip it right back.

What's after farm building? I think the answer is team building. There are only two global teams possible. Those who ask for a local count of mind units have not read the Ingress storyline. But there are countless local teams. There's room for as many teams as you might wish to create. One city can hope to have many teams. Just like there is no limit to how many portals you can submit, it is for you to decide if you want to build a team.

I am glad to have reached that stage in the game where I am taking active steps towards building what I hope will be the top Resistance team in New York City. My team really starts taking off when there are at least three times more people playing the game. Ideally my team will thrive best when the game is fully public. Anyone can get Gmail today. Anyone should be able to start playing Ingress. There are about five members of timtomhuze who have taken to expressing hostility to me personally on the local faction chat. They don't like the idea of me building a team. Guess what! It is not like I need your permission. This is not your game I am playing.

This is not a complex game. The only complexity comes from how big a team you can build. Complex farming and attack events are possible when you have a large team. But large is not how many people you manage to get on your G+ group. Large is how many people you can get to show up for your events. Last I checked the two teams in NYC hovered at about a dozen people showing up at any one time. This game is early stages. I look forward to building my team: The Squad.

Hardware is not far. I think Google's Motorola unit is about to create magic. And if Google is to outperform Apple on all the core software, what is to say the Google operating system is not also better?

Google Is Attacking Apple From The Inside Out—And It's Working

Then, in October came Google Search—which included a voice search feature to compete with Siri.

It also put out a new YouTube app, to replace the one that Apple removed during its last iOS upgrade.

Google doesn't plan to stop there.